Beginning Sunday, I will be running a daily Senior Spotlight about our 8 seniors.  Each day will highlight a senior and some of the accomplishments he has made throughout his high school career.  The highlights will be run on the website with graphics also posted on Twitter and the Instagram account. 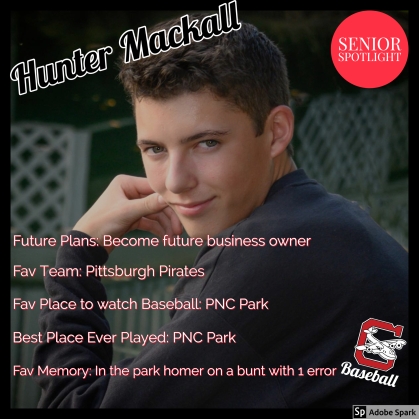 Hunter Mackall was a new addition to the Clipper baseball squad this year but in a short time he made quite the impression.  Hunter showed excellent bat speed, a very strong arm and good speed as he roamed the outfield during the first three weeks of spring training.

Hunter last played baseball as a Freshman when he was a student at Crestview.  Since coming to Columbiana he has wanted to play but due to other circumstances he was unable.  He made the decision as a senior in mid February it was something he wanted and was able to do and once that decision was made he was all in as a Clipper baseball player.

Hunter’s family consists of two sisters, one is 16 and the other is 2 1/2.  He loves to travel to Myrtle Beach and his future plans include working for his dad as a welder and solderer.  Down the road he would like to to be a future business owner.

“I have had Hunter in class the past two years and was really excited when he decided to play baseball this season.  He came to me about a week before the season and said he is finally able to play and from that point on he was committed to being a Clipper baseball player.  In the short time we had together on the field he showed a lot of growth not only as a player but also as a leader.  He would take the outfielders and start drills with them and he even took some of the younger players under his wing to help them out.  Hunter always had a smile on his face and I could see the pure joy that baseball was bringing him.  Getting to know Hunter in class and then the short time on the baseball field, I learned how hard of a worker he is.  His future goal entails having his own business and I have no doubt he will be able to accomplish this.”

You can also check out previous senior spotlights here: